How can homeowners fix the common plumbing issues?

There are some of the common household issues that can be resolved by a homeowner but most of them call for expert services which emergency plumbers are readily here to solve.

Common plumbing problems and their solution

Many homeowners complain that although they had not been using the water too much but their water bill seems to be too high. There are such homeowners too who had been out on a vacation for months and still their water bill was high. Well there can be many reasons for it. You might not be aware of it that the faucets in your bathroom leak. It is obvious when you are away from the house you might not know what’s going on. Day after day dripping of water can make you lose gallons of water. Sometimes there is problem with the water meter too. There are times when the flushes are found running at unusual intervals even when no one has flushed the toilet. This can be a serious waste of water and it can immensely increase your water bill.

Also Read:  Dishwasher Repair Tips That Can Help You Save Money 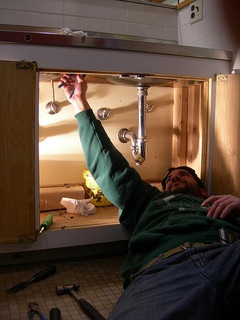 When you are taking bath, you might feel that the flow of water is low. This is not necessarily because of limited supply of water. Mostly it is because of clogged shower head. This happens when the shower head gets old. You can use vinegar to clean the showerhead. Cleaning the accumulated minerals stuck in the wholes might solve the problem once. You might also have to replace the shower head.

Pipes freeze up in winters. Water left in the pipes freezes often. Such frozen pipes can burst anytime. When you will start using the heating system in winters, you will find its not working well. That might be a sign of frozen pipes. It is not a problem with the heating system only. The ordinary pipes of the house might also freeze because of cold. In order to melt the ice, use water or electricity heaters to produce steam. Open the faucet up so that when the water melts, it is released.

This is the most annoying problem. Before getting the toilet replaced, there are some steps you can take to fix it. Poor flushing can be caused due to poor water pressure. Maybe the float needs to be adjusted or the refill valve of the toilet is clogged. Try adjusting both of them to see if the flush starts working. Sometimes clogged drains can also be a cause of poor flushing. If that does not work, then call the plumber of course.

Also Read:  Plumbing Solutions In The Blink Of An Eye

Plumbing Solutions In The Blink Of An Eye