I knew about Spanish revival style homes, characterized by the white stucco buildings, the gabled roofs, and the terracotta moldings. But honestly, I didn’t know it extended to every nook and corner of the home,

I knew about Spanish revival style homes, characterized by the white stucco buildings, the gabled roofs, and the terracotta moldings. But honestly, I didn’t know it extended to every nook and corner of the home, and by that I mean the bathroom. It was only after we decided to undertake a home improvement project and remodel the bathrooms, I decided to study this style in further detail. Here’s more on the elements that you must incorporate if you wish to create a bathroom befitting the Spanish revival era.

Bathrooms belonging to the Spanish revival style were fairly big in size, probably because this style swept the country during the first quarter of the last century when houses were large and spacious. Though not all modern homes have big bathrooms, there are certain distinct elements you can integrate into your existing bathroom to give it the elegant Spanish style look and feel. 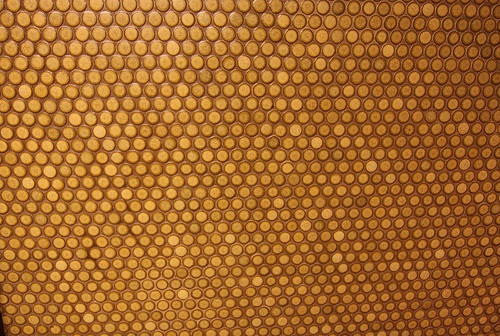 Let’s begin with the walls. Tiles were the most commonly used bathroom wall finishes in the early 20th century Spanish revival style bathrooms. Brightly painted tiles are a characteristic element of Spanish revival architecture. Use colorful tiles, whether it’s the backsplash around the mirrors or the wainscot forming the lower half of the walls. Talavera tiles were a staple in Spanish style dominated houses. Popular color choices for tiles would be ochre, sienna, and salmon, reminiscent of the Spanish era. Take a look at the image below. Honeycomb patterned tiles in warm earthy tones lend the right Spanish feel to the bathroom.

Also Read:  How to Keep your Bathroom Light and Bright

–          Printed wallpapers above the wainscot resembling painted tiles are a cost-effective solution to give your bathroom walls a Spanish style feel.

–          You can also go in for wall art such as landscape oil paintings which were traditionally used to adorn walls when Spanish Revival style was in vogue. Choose rich colors with gold backgroundsframed in black for the perfect look.

Again, it’s gotta be tiles! Arrange them in a geometric pattern, hexagonally shaped, and you have achieved the right Spanish look. Hand-painted ceramic or Catalina tiles are perfect for use in bathrooms. Or you could opt for terracotta flooring – what better way to usher in the Hispanic look! 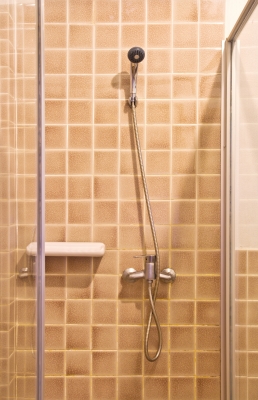 Think of an old-fashioned bathroom, and a claw-footed standalone bathtub instantly springs to mind. If you have enough space, go for it! Having a separate shower area, such as what you see in the picture, with geometric pattern on the wall and honeycomb pattern on the floor is so, so Spanish! And did you see the dainty wall candles, the ornate mirror, a small wall painting, and the beautiful brown backsplash? Can it get any more Spanish? If investing in a separate shower area isn’t possible due to space crunch, use tiles in vivid colors in the shower area, arranging them in geometric patterns, like square tiles set diagonally to form a zigzag pattern. For instance, if you have terracotta floors, choose from orange and red hued tiles to blend well with the rest of the bathroom interior.
Also Read:  Cheap Improvements For Small Bathrooms

If space permits, go for arch doors and large windows (of course, privacy comes first, so bear that in mind!). Round top doors add character and Spanish touch to the room. A dark wood shutter over windows is a popular theme in Spanish style bathrooms. If you’re a DIY wizard, install them yourself. But if you aren’t so sure of your carpentry skills, it’s safer to go with a window expert! We chose reputable company to do the doors and windows of the entire house – got a good deal with a discount!

Bathrooms of yore were large, and needless to say, housed floor-to-ceiling cabinets for storing clothes and linen. Plenty of cabinets in a rich, brown color, as viewed in the image below, juxtaposed with a colorful tile backsplash below the mirror and a granite top that blends well with the rest of the décor is a classic example of a Spanish revival style bathroom.

Wrought iron furniture and detailing were prevalent in the Spanish revival styles. Large mirrors, crowned with wrought iron lighting give the impression of a spacious room and also add an old-world charm to the bathroom. Make use of decorative wall sconces complete with Gothic candlesticks to impart the Spanish charm to your space. Wall candles against a rich and pleasing red wall contrasting beautifully with blue tiles make for an inviting bathroom, as seen in this image.

So there we are! Spanish style bathroom? We’ve covered it all! Wall sconces? Check! Terracotta? Check! Beautifully painted tiles? Check! Deep, earthy colors? Check! Add a touch of the old to the new in the right balance and watch your space getting completely transformed!

Looking for Spanish revival style bathroom interiors? Look no further! An architectural style that swept the nation in the early 20th century, Spanish revival style is vintage, yet chic. This article describes in detail the essentials of this style and the elements you need to combine to give your bathroom just the right Spanish touch!

The Septic System and Bathroom Drains

Comfort and Style in the Bathroom

Choosing the Right Kitchen Countertops for Your Home

The Telltale Signs That Want You to Remodel Your Residential Garage

Get the Most Bang for Your Buck: Simple Home Upgrades That Add Value

5 Residential HVAC Installation Mistakes and How to Avoid Them