With so many trends in green building, it seems like the next big thing in environmental sustainability pops up every day. Slowly but surely, the World is changing to incorporate greener methods of building, from

With so many trends in green building, it seems like the next big thing in environmental sustainability pops up every day. Slowly but surely, the World is changing to incorporate greener methods of building, from LEED certified buildings to new developments in urban growing. One trend that’s sweeping both the United States and the rest of the World is the idea of retrofitting buildings, from small houses to large high-rises, with green roofs. Though the concept is fairly new, those that have installed green roofs have already seen their immediate benefits, such as reduced energy costs, an increase in real estate value and federal and local tax incentives.

One of the major immediate effects of installing green roofs on your buildings is a considerable reduction in energy costs during both winter and summer months by adding an extra layer of insulation, which not only keeps air conditioning and heating from escaping, but also protects your house from external conditions. According to a study done by the University of Toronto in 2012 found that the reduction in energy costs during the winter for every unique structure they tested was “dramatic.” The effect for warmer climates was nearly identical. All across the board, green roofs kept desired air in while reducing the effects of the harsh climate outside. This not only reduces overall costs, but also harmful greenhouse gasses produced from heating and air.

Also Read:  Roofing Layers – Understanding What Is Under The Shingles

Outside of the reduction in energy costs, the environmental benefits make green roofing even more appealing. Whereas a normal roof requires nearly annual maintenance and thousands of dollars, a well-built green roof can sustain years of heavy winds and the constant beating that nearly every roof endures. This is because of two factors. Firstly green roofs acts as a cistern for rainwater and storm water runoff, which can then be repurposed for watering plants, among other uses. Secondly, because UV rays get absorbed by the green roofs, they do not harm the actual infrastructure, unlike regular roofs, which must endure the constant beating by the sun. Over the long run, this can save the average homeowner thousands of dollars, along with peace of mind. 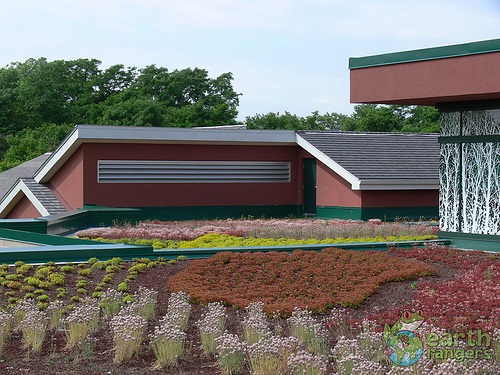 By Earth Rangers under CC BY-ND 2.0

There are disadvantages to installing green roofs, but they pale in comparison to the benefits. The initial cost of building a green roof can be fairly high, especially considering the uniqueness of every roof. Furthermore, the additional weight of the soil substrate and water retention can lead to a need for more structural support. Also, green roofs are not feasible with every structure. Many older homes were not built to sustain the added structural weight. A construction company will be able to tell you if this is feasible or not. Once they are installed, though, the monetary benefits begin almost immediately, especially if the initial cost is low.

Also Read:  Simple Tutorial On How To Install Step Flashing Under Your Roof Siding

Green trends pop up every day. Some aren’t feasible, many are overpriced, and most of them seem like risky propositions. This one is no different. If it does work out, though, it has the potential to change architecture and the way we live forever. Imagine looking out on the skyline of a given city, and seeing nothing but green. It’s possible, and it may very well happen before you know it.

Hire a professional homestead roofing company for your residence